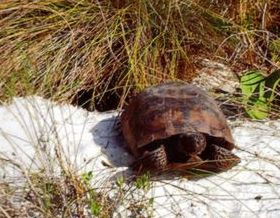 The loveable, slow-moving Gopher Tortoise is famous for digging underground burrows 10 to 35 feet long with "bedrooms" at the ends. The burrows are found in sandy well drained areas through out Florida. In good weather, the tortoise emerges from its burrow to browse on low-growing vegetation, including leaves, grass and wild fruits. Over seventy other kinds of animals have been found using the state protected Gopher Tortoise burrows in various ways. These include burrowing owls, raccoons, opossums, gopher frogs, spiders, insects, cotton rats, indigo snakes, and rattlesnakes. 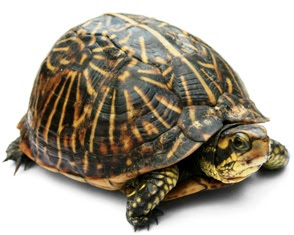 The Florida Box Turtle is an attractive turtle that has been used a a children's pet. It spends most of its time wandering through woods, fields, and gardens, but it will occasionally soak itself in water. A small to medium sized turtle, the Florida Box Turtle is one of the well known subspecies of eastern box turtle. In both appearance and color it is unlike its northern cousin the Eastern Box Turtle. It can be quickly identified by the almost black background to its elongated shell with the back of the shell flaring out. Box turtles have a highly domed carapace (upper shell) and a hinged plastron (bottom shell) that can be completely shut to keep out predators. These characteristics contribute to this turtle's descriptive name, 'box turtle'. The Florida Box Turtle feeds on different types of invertebrates, insects and plant matter. This species of box turtle seems to be very carnivorous even as adults. Males are slightly larger on average than females, the posterior lobe of their plastron is concave, and the claws on their hind legs are short, thick, and curved. Males also have thicker and longer tails. Females' rear claws are longer, straighter, and more slender, and the posterior lobe of their plastron is flat or slightly convex. Males have red irises and females have yellowish-brown irises.