While most snakes in Florida are harmless and provide important services such as controlling rodent colonies, we do have six venomous snakes that call Florida home. By learning to identify these snakes we can protect both our self and  non-venomous snakes that live in Floridian nature. This rat snake was enjoying investigating my fence and although I was startled when I saw him, I was happy to see he was not a deadly snake! All five of Florida's deadly pit vipers, including the Dusky Pygmy Rattlesnake can be recognized by their stocky bodies, relatively small necks, large triangular heads, and eyes with vertical slit pupils. The coral snake is easily recognized with its color band design (red on yellow kill a fellow). 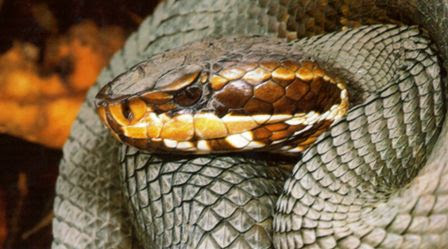 The Florida Cottonmouth or Water Moccasin, is a serpent that strikes terror in the hearts of hikers, swimmers, and freshwater fishermen. This snake is a heavy bodied pit viper with a large triangular head. The coloration of the Cottonmouth is variable. Older and larger snakes tens to be uniformly black, brown to reddish brown. the young are banded with a dark color against a lighter background. Like all pit vipers, Cottonmouths have a deep facial pit between the nostril and the eye. Unlike the harmless water snakes, the Cottonmouth tends to hold it's ground rather than go into the water, when approached. The Florida Cottonmouth  swims with his head well out of the water, a trait that other water snakes don't have. 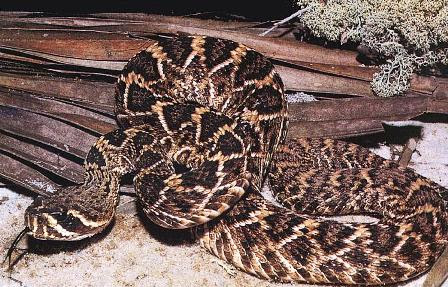 The Eastern Diamondback Rattlesnake is the most feared and dangerous snake in both Florida and the United States! Diamondbacks are found throughout the state of Florida. he average adult size of the Eastern Diamondback Rattlesnake is 36-72 inches, with the record length being 96 inches. The tail of the Diamondback is usually a different shade, brownish or gray, and toward the end of the tail the diamonds fade out or break into bands. The large and thick head has a light bordered dark stripe running diagonally through the eye and there are vertical light stripes on the snout. The pupil is vertical and catlike. The snakes venom is produced in glands which are located below and behind the rattlers eyes. These bulging glands, on either side of the head help give the head a triangular appearance. The Eastern Diamondback rattle is made of of a substance called keratin, similar to human fingernails. At birth, a rattlesnake has only a single button at the end of its tail. As the snake grows, another loosely interlocking segment is added each time it sheds its skin.

The legendary and colorfully banded  Eastern Coral Snake can be distinguished from the Scarlet Snake and the Kingsnake by its blunt black snout and the fact that its red and yellow bands touch each other. "Red on yellow, kill a fellow" is an old jingle that most Florida children (and adults) are familiar with. It is a quick way to know if the snake you see is a deadly coral snake or one if it's mimics, the Scarlet Kingsnake or the Scarlet Snake. Coral snakes have a wide black band touching a smaller yellow band, with a third band of red surrounded on both sides by the yellow bands. The tail is black and yellow, without any red rings. Another distinguishing feature of the Eastern Coral Snake is that it's rings go all the way around their body, although they are not as intense on their bellies. The Scarlet snake has both a red head and a white belly, two easy features to distinguish the two. Most coral snakes are less than thirty inches long, averaging between 20 to 30 inches.  The record length for a Coral Snake is 47.5 inches long. 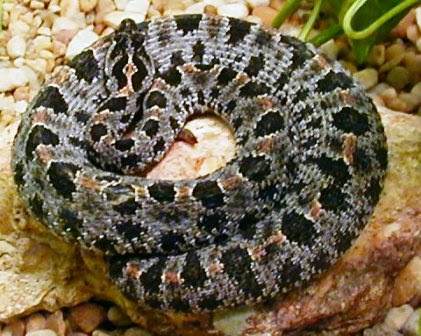 The Feisty little dusky pygmy rattler is rarely longer than twenty inches, and is common throughout the state of Florida. The Dusky Pygmy Rattlesnake is a hot-tempered snake, usually striking repeatedly at the slightest threat. This pit vipers venom is very potent but the dose it delivers is small. Although the Pygmy Rattler vibrates its tail when annoyed, the little rattles are barely audible, sounding more like the faint buzz of an insect. The Dusky Pygmy Rattlesnake is a small snake, but very thick for its size. The top of the triangular shaped head is covered with nine large scales. The body color is light to dark gray. A longitudinal row of black or charcoal, transverse blotches disrupts a reddish brown stripe running down the middle of the back. Dark spots on the side line up with the blotches. The tail is slender and ends in a miniature rattle. The belly is heavily mottled with black and white. 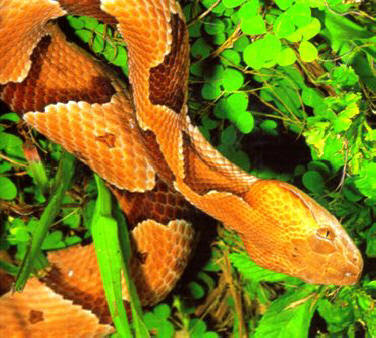 The Southern Copperhead  inhabits the Florida panhandle and is not found in southern Florida. The average length of adult copperheads is 30 inches. They have an unmarked copper-colored head, reddish-brown, coppery bodies with chestnut brown cross bands that constrict towards the midline. Copperheads are thick-bodied and have keeled scales. Copperheads feed on baby cottontails, swamp rabbits, rats, mice, birds, snakes, lizards, baby turtles, frogs, toads, and insects, especially grasshoppers and cicadas. 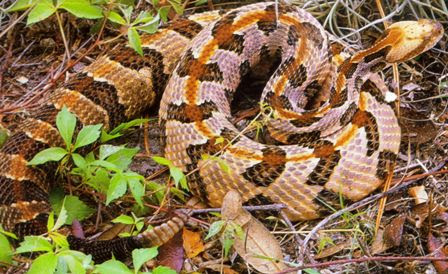