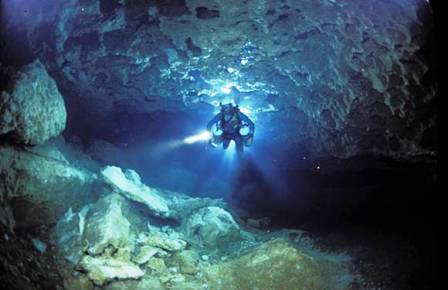 This week's pick is in honor of my son Sean who just started working as a writer for the Chiefland Citizen. Fanning Springs is a  Florida city in Gilchrist and Levy counties. The population was 737 at the 2000 census, with an estimated 2004 population of 800. Fanning Springs Florida is famous for the springs and the Suwannee River. Located on the central, west coast of Florida on the Suwannee River.  Fanning Springs is breath taking at first sight.  It has a large basin with very clear water and excellent scenery all around.  Depths vary from 2 to 21 feet depending on the river height.  Water discharges from visible sand boils and small cracks in the rocks that surround the bottom.

Fanning Springs consists of two springs or pools, each with a run discharging to the Suwannee River. Fanning is about 200 ft wide and 350 ft long. Its vent, near the southeast wall, is about 30 feet in diameter. Pool depth is greatest near the vent, 18 ft or more, depending on river stage. The vent area is nearly funnel shaped, with a sandy bottom and limestone sides. The spring run, about 100 ft wide, 8 ft deep, and 100 ft long, flows westward. Little Fanning Spring has a nearly horizontal opening into a limestone hillside. It flows nearly southwest and the water is slightly turbulent for about 10 ft beyond the vent. The run widens from about 10 to 30 feet, and in a short distance turns west and joins the Suwannee River about 1,000 feet downstream. Fanning Springs is used primarily as a recreational area. Diving is allowed with a small additional fee, although it is primarily used for certification dives for local shops. 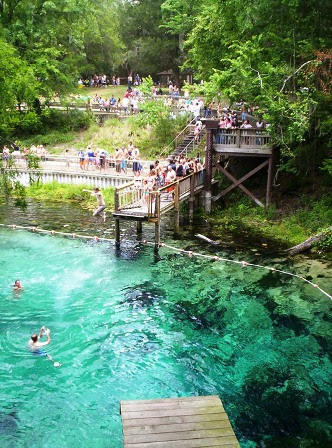 Fanning Springs Florida is also home to the 1836 site of Fort Fanning, located on a high Suwannee River bluff.  Fort Fanning was built in 1838 during the Second Seminole War. The Fort was originally called "Palmetto", but was renamed in honor of Colonel Alexander Campbell Wilder Fannin. Made of wood, and situated in a warm humid climate, remnants of the actual fort have long since disappeared. Colonel Fannin served under General Andrew Jackson in the First Seminole War. As a lieutenant at the beginning of the Second Seminole War he was noted for outstanding service when he lead a charge in a battle near the Withlacoochee River. His objective, during the Second Seminole War, was to capture Seminoles for deportation to the West.

Many visitors enjoy the picnic area, playground, volleyball court or use the park's large open areas for ball games, throwing Frisbees, and also for events. There is a canoe/kayak launch available, a nature trail and a boardwalk that overlooks the river. In the summer the gazebo at the end of the boardwalk is a fine place to watch sturgeon jumping. Manatees are often seen in the springs during the winter months and occasionally in the summer. White-tailed deer, gray squirrels, red-shouldered hawks, pileated woodpeckers, and barred owls are some of the other animals seen in the park. The Fanning Springs River walk, as well as the Nature Coast Greenway Trail are great walking trails and the perfect spot to enjoy some Floridian nature.
at 12:40 PM No comments: