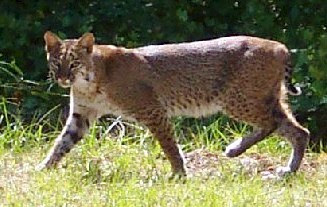 Bobcats are a common cat in Floridian nature and are sometimes even confused for a panther siting. The easiest way to tell the two cats apart is the famous "bobbed tail "of the bobcat.  I encountered a very large bobcat while walking through the woods on a nature walk. I had stopped to enjoy the view, looking down on an old limestone pit and when I got up and turned the next corner a bobcat was standing in the path. The cat looked as surprised to see me as I was to see her. She was a large cat, coming up to my waist in height, but there was no mistaking the bobbed tail which was about half the length of a normal one. She was gracious enough to go behind a bush and allow me to pass by without an incident to either of us. Due to its abundance in Florida, the bobcat is not listed as endangered nor threatened. However, it is classified as a fur-bearing game animal by the Florida Game and Freshwater Fish Commission and can only be hunted during certain months of the year. In recent surveys, Florida was the only state to show a decline in bobcat numbers in recent years.

As we see in this photograph that was in the Citrus County Chronicle, the bobcat's environment and man's environment often overlap, According to FWC, bobcats den and rest in thick patches of saw palmetto and dense shrub. Bobcats tend to weigh between 12 pounds and 28 pounds, sport a short “bobbed” tail, and prey on small animals such as rabbits, rodents, birds and occasionally deer. They help control populations of other species that may be considered household or yard pests, including rodents and rabbits.
at 8:20 AM