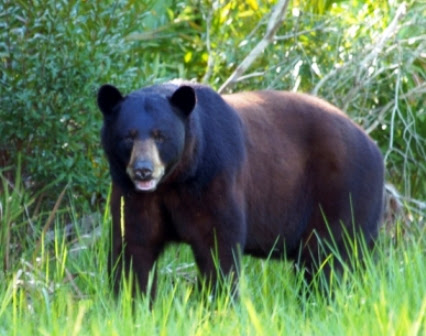 This week-end was the first time bear hunting was allowed in Florida. We still do not know the exact number of bears killed in the hunt but we do know bears were hunted down at a much faster rate than the officials expected and the bear hunt was cancelled after just two days. Florida black bears have had plenty of problems existing before the bear hunt.

Approximately 25-50% of all cubs die before they turn one year old. Natural causes of death include drowning, den cave-ins, hypothermia due to flooded dens, starvation, infections from injuries, and predation (by other bears). Road kills are considered the leading known cause of Florida Bear mortality. More than 1,356 bears are documented to have been killed by vehicles since 1976. Well over 100 bears are killed on Florida roads each year, with the record number, 132, occurring in 2002.  Once fully grown, black bears have no predators besides humans and other bears. The other causes of mortality are old age, starvation,  poaching (Florida has no legal hunting season), other bears,  and disease.

So far the latest tally claims  295 bears have been killed in Florida, nearing the official limit, Florida wildlife authorities said late Sunday. The Florida Fish and Wildlife Conservation Commission stated it was closing the 2015 hunt, because the numbers were already close to the kill plan of 320 bears.
at 7:14 AM No comments: 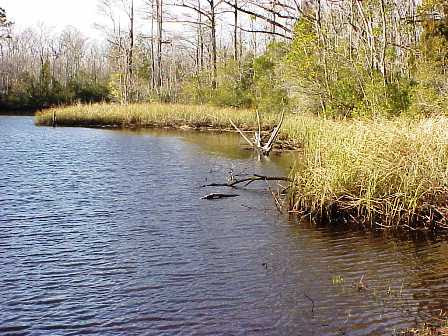 The largest freshwater marsh is the famous Everglades in the southeastern part of the state. Coined the River of Grass by the matriarch of the Everglades, Marjory Stoneman Douglas, the habitat is now considered on of the most imperiled in the country. Decades of attempts to drain the swamp and make it of some use to man has left the system in a dysfunctional state.

Freshwater marshes are generally wetlands with an open expanse of grasses and other grass-like plants. Freshwater marshes generally contain few, if any, trees and shrubs. Marshes have standing water for much of the year and act as natural filters. As water passes over the marsh, water flow is slowed down, and suspended particles settle out. Like the state's freshwater swamps, water levels fluctuate in the marshes. From June through September daily rains the marshes have standing water. From October to December of January, when the rainfall amounts are very low, the standing water gradually flows towards the coast or seeps into the porous ground. By February and continuing through the end of May, many marshes are completely dry. This makes them susceptible to fires. 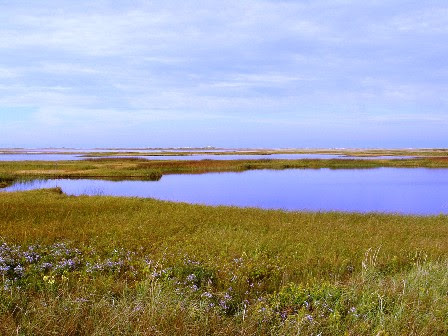 Fresh Water Marshes are part of the Freshwater Wetlands and Aquatic Ecosystem. Florida has both the largest freshwater lake and the largest freshwater spring (Wakulla Springs) in the contiguous United States. This makes Florida a very rare state with a lot of aquatic diversity, from the mangroves that prevent erosion to the swamps and marshes that naturally filter our water. Most of the marshes in Florida occur south of Orlando. Before the boom years of the early and mid 1900s, Freshwater marsh habitats flourished along the St. Johns and Kissimmee Rivers and in scattered spots in central Florida. Many of these sites are now gone or severely altered, victims of development.

With so many birds flying in the beautiful Florida sky, its sometimes easy to forget that some of our birds are threatened and even endangered. Woods storks are one of those endangered birds. Wood storks are tall, white denizens of freshwater or brackish wetlands and swamps. They can be identified by their long legs, featherless heads, and prominent bills. These waders feed on minnows in shallow water by using their bills to perform a rare and effective fishing technique. The stork opens its bill and sticks it into the water, then waits for the touch of an unfortunate fish that wanders too close. When it feels a fish, the stork can snap its bill shut in as little as 25 milliseconds—an incredibly quick reaction time matched by few other vertebrates. A large, white, bald-headed wading bird of the southeastern swamps, the Wood Stork is the only stork breeding in the United States. Its late winter breeding season is timed to the Florida dry season when its fish prey become concentrated in shrinking pools.

One of the most beautiful birds in Florida is the Roseate Spoonbill and although not threatened it is a species of special concern. Prior to the 1850s, there were probably thousands of spoonbills along the Gulf Coast in Texas, Louisiana and Florida. By 1920, plume hunting and colony disturbance largely depleted the spoonbill population in the United States.The most distinctive characteristic of the roseate spoonbill is its long spoon-shaped bill. It has a white head and chest and light pink wings with a darker pink fringe and very long pink legs. The roseate spoonbill is about two and a half feet in length with a wingspan of about four and a half feet. Both males and females have the same plumage and coloring. The male is slightly larger than the female and its bill is a little longer. The roseate spoonbill can be found on the coasts of Texas, Louisiana and southern Florida. It is also found in the tropics and in Central and South America. The roseate spoonbill lives in mangrove swamps, tidal ponds, saltwater lagoons and other areas with brackish water., spending lots of time in the water looking food like small fish, shrimp, mollusks, snails and insects. 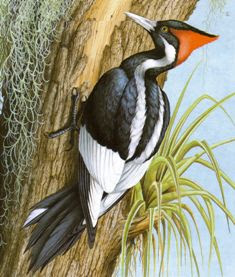 The ivory-billed woodpecker  is among the world’s largest woodpeckers but that hasn't protected it from being endangered.  The Ivory-billed Woodpecker  is one of several species whose numbers have dwindled to the point where it is uncertain whether any remain. The species is listed as critically endangered and possibly extinct by the International Union for Conservation of Nature. Only the imperial woodpecker of Mexico, now thought by many to be extinct, was larger than the ivory-bill. Averaging about 20 inches in length, the ivory billed woodpecker is frequently mistaken for the smaller but similarly marked pileated woodpecker. Beetle larvae are the primary food source for ivory-bills, which are often the first woodpeckers on dying trees searching for these larvae. Ivory-bills are believed to mate for life. They share the duties of incubating their china-white eggs and raising their young. Stiff wing feathers make the ivory-bill an especially loud flyer!
at 6:42 AM No comments: 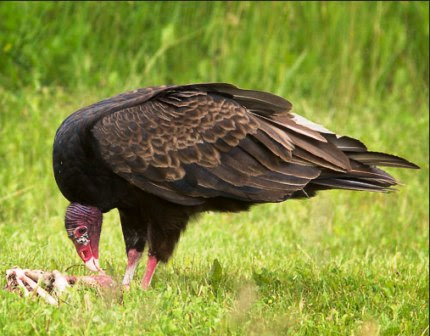 One common fixture in Floridian nature is vultures or buzzards. Although it has an ugly, bare-skinned face, the Turkey Vulture is beautiful on the wing. Seldom does this graceful and talented bird flap its wings as it soars over large areas searching for carrion. The Turkey Vulture uses its sense of smell to locate carrion. The part of its brain responsible for processing smells is particularly large, compared to other birds. Its heightened ability to detect odors allows it to find dead animals below a forest canopy. The Turkey Vulture roost in a large group, but usually forages alone, unlike its smaller, more social relative, the Black Vulture. Although one Turkey Vulture can dominate a single Black Vulture at a carcass, usually such a large number of Black Vultures appear that they can overwhelm a solitary Turkey Vulture and take most of the food.

The Turkey Vulture is a large bird. It has a wingspan of 67–72 inches, a length of 25–32 inches, and weighs between two and six pounds. Turkey vultures have dark brown to black plumage; a featherless, purplish-red head and neck; and a short, hooked, ivory-colored beak. The adult turkey vulture's head is small in proportion to its body and is red in color with few to no feathers. It also has a relatively short, hooked, ivory-colored beak. The irises of the eyes are gray-brown; legs and feet are pink-skinned, although typically stained white. The turkey vulture's eye has a single incomplete row of eyelashes on the upper lid and two rows on the lower lid. Its life expectancy in the wild ranges upward of 16 years, with a captive life span of over 20 years being possible. 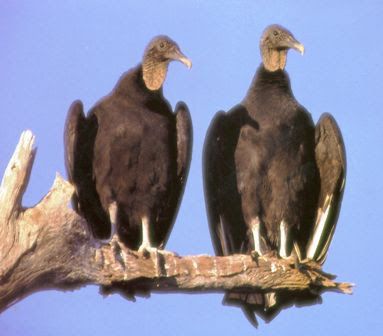 The more southern of our two common vulture species, the Black Vulture flaps its wings rather frequently while it soars. It is more social than the Turkey Vulture, often traveling in large flocks. Like the Turkey Vulture, the Black Vulture’s numbers are increasing and its range is expanding northward in response to global climate changes. These vultures are found in lowland areas along rivers or in open habitats in the southern United States and throughout Central and South America. They rarely inhabit dense forests. The Black Vulture has adapted well to human habitats and can be seen at garbage dumps, markets, and fishing docks. Vultures eat carrion in the form of road-kills or dead cattle in pastures. Black vultures are more aggressive and may occasionally kill or injure lambs, calves, cows giving birth, or other incapacitated livestock. These birds soar looking for carcasses or other scavenger activity.
at 1:30 PM No comments: 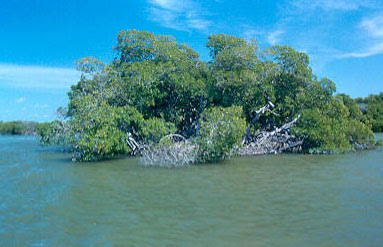 Mangroves are one of Florida's true natives. They thrive in salty environments because they are able to obtain fresh water from saltwater. Some secrete excess salt through their leaves, others block absorption of salt at their roots. Florida's estimated 469,000 acres of mangrove forests contribute to the overall health of the state's southern coastal zone. This ecosystem traps and cycles various organic materials, chemical elements, and important nutrients. Mangrove roots act not only as physical traps but provide attachment surfaces for various marine organisms. Many of these attached organisms filter water through their bodies and, in turn, trap and cycle nutrients. 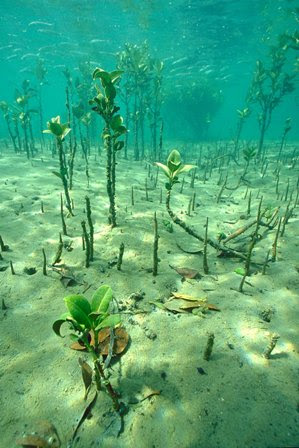 Worldwide, more than 50 species of mangroves exist. Of the three species found in Florida, the red mangrove is probably the most well-known. It typically grows along the water's edge. The red mangrove is easily identified by its tangled, reddish roots called "prop roots." These roots have earned mangroves the title, "walking trees." The mangrove appears to be standing or walking on the surface of the water. Mangroves are common as far north as Cedar Key on the Gulf coast and Cape Canaveral on the Atlantic coast. Black mangroves can occur farther north in Florida than the other two species. Frequently, all three species grow intermixed.
at 6:26 AM No comments: