Ernest Hemingway, a preeminent literary figure of the 20th century moved to Key West in 1928, living there periodically until 1940. Hemingway wrote all or part of his most famous works including A Farewell to Arms, For Whom the Bell Tolls, and The Snows of Kilimanjaro in Key West. In 1954, Ernest Hemingway became only the fifth American to receive the Nobel Prize for Literature. He also was awarded a Pulitzer Prize for his novel The Old Man and the Sea.

Ernest Hemingway, himself a great sportsman, liked to portray soldiers, hunters, bullfighters - tough, at times primitive people whose courage and honesty are set against the brutal ways of modern society, and who in this confrontation lose hope and faith. His straightforward prose, his spare dialogue, and his predilection for understatement are particularly effective in his short stories, some of which are collected in Men Without Women  and The Fifth Column and the First Forty-Nine Stories

Death and violence were the two great constants in Hemingway's troubled, chaotic life. Fifty-one years later, Ernest Hemingway used a gun to kill himself. He was a tough, strong man with strong principles. Hemingway "believed that life was a tragedy and knew it could only have one end", yet he was blessed with talent and drive. That may have made it harder for him to admit his failures and correct them. Hemingway died in Idaho in 1961. In 2001, two of his books, The Sun Also Rises and A Farewell to Arms, would be named to the list of the 100 best English-language novels of the 20th century by the editorial board of the American Modern Library.
at 4:47 AM No comments: 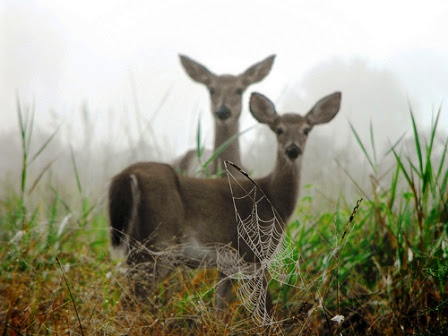 Paynes Prairie is biologically, geologically, and historically unique. Payne's Prairie is located south of Gainesville, Florida, in Micanopy. This park became Florida´s first state preserve in 1971 and is now designated as a National Natural Landmark.

The water in this huge saucer-like basin has had a way of coming and going because of a sinkhole in one corner. From time to time the sink would fill with debris and the water would rise and remain. Years later the sinkhole would become unplugged, the water would drain away and the area would revert to savanna. In 1892 a small steamer plying the lake was stranded when the water suddenly disappeared. Since then the basin has remained a treeless prairie. 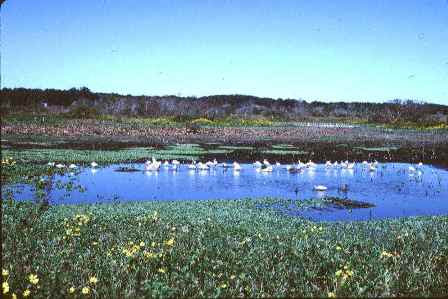 The La Chua Trail, part of the 21,000-acre Paynes Prairie State Preserve, is at the southeast edge of Gainesville. The trail traverses an immense patchwork of fields and marshes. The grass and brush along the first stretch can be very good for sparrows in winter. A short side trail here leads to a pond, Alachua Sink, where you can see waders and, during periods of low water, shorebirds. The trail proceeds into wetter habitats, with a drainage canal on one side and marshes on the other, until it reaches the shallow weedy open water of Alachua Lake, the center of the Paynes Prairie basin.

The Bolen Bluff Trail is on the south side of Paynes Prairie State Preserve. The trail is divided into two parts. There's an upland loop, about half of which is dry woodland dominated by laurel, live, and water oaks while the other half is shady mesic hammock forested with swamp chestnut oaks and magnolias; there are a few small ponds along the latter stretch. At the far end of the loop, a spur trail, the Bolen Bluff Dike, descends onto the Prairie basin, running through open brushy and marshy habitats for three-quarters of a mile (one-way) to an observation platform.
at 9:19 AM No comments:

Scorpions vary in size from one to four inches long. These crab-like animals are dark brown, have a broad flattened body, and ten legs. The front pair of legs is modified into claw-like pincers which are used to hold their prey. A scorpion's most noticeable feature is their curled fleshy tail.  It is usually held over their body.  The scorpion tail ends in an enlarged upturned tip that ends in a stinger. The sting is used for defense as well as for capturing prey.

Scorpion venom is a nerve poison, but the dose injected usually is not enough to kill adults. While no Florida scorpions are capable of inflicting a lethal sting, those that have had scorpion stings report that it is very painful, probably more so than a wasp sting.  Scorpions rarely sting humans except when pinned against the skin, such as under clothes or when trapped in bed sheets.  The site of the sting may be sore and swollen for some time.  An antivenin is available for severe reactions to scorpion stings.

Scorpions like to hide outside under boards, rubbish, or other areas that provide shelter and protection. They are a nuisance especially in recently built homes. These predators are active at night, and do their share to reduce pests in and around the home.  Another interesting feature about scorpions is that they glow under ultraviolet lights – so get out the black lights to help track them down. 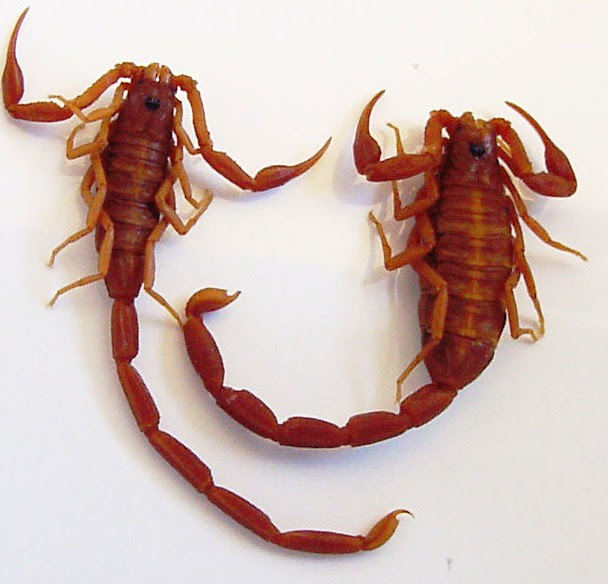 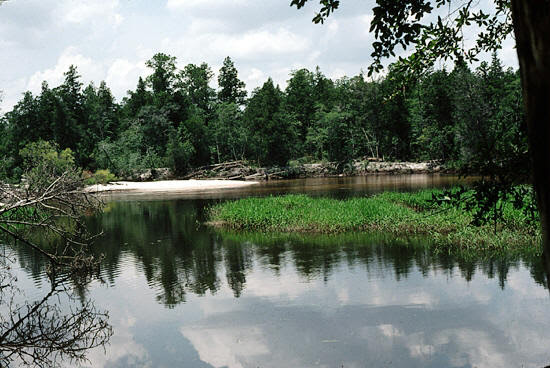 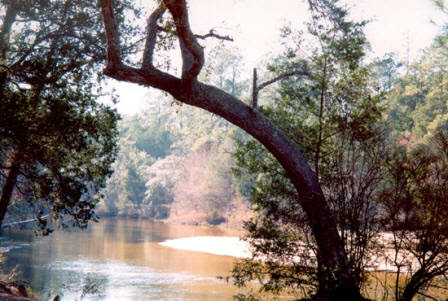 Upland pine forests dotted with persimmon, turkey oak, sweetgum, flowering dogwood and other shrubs are found in the park. Open canopy forests combine different types of pine and dense groundcover such as gallberry, saw palmetto, wiregrass, wild blueberry and wax myrtle. Along the river and large streams in the floodplain area, the forest is dominated by various species of oaks and hickory, red maple, sycamore, magnolia, holly, tupelo and azaleas. The water level in the floodplain and swamp lakes fluctuates and may even become completely dry. Plants vary according to the water supply. Look for water fern, water lily, coontail, bladderwort, spatterdock and other emergent plants. White-tailed deer, bobcats and turkeys are quite common. River otter may be seen occasionally and the graceful Mississippi kite is often observed soaring overhead in the summer.
at 1:51 PM No comments: