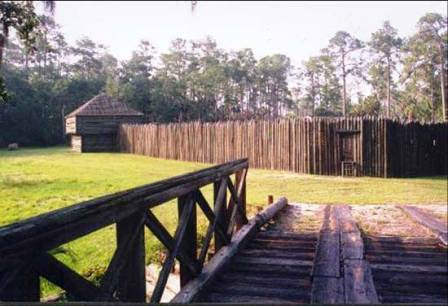 Take time on Memorial Day week-end to explore some of the history of Florida. Fort Foster Historic site is located in the Hillsborough River State Park and is steeped in history and natural beauty. The natural scenic beauty of the park is astounding and many trails offer the visitor the opportunity to experience this first hand.


Fort Foster may be visited only by one of the tours leaving hourly on week ends from adjacent Hillsborough State Park. A quarter mile trip by van from the park's visitor center takes you to a shelter 900 feet from the site. From there you will continue on foot along the old Fort King Military Road to the fort. Rangers, in the uniforms of those 2nd artillery soldiers who manned the fort in 1837, explain the events of that time and the life of the artillerymen posted there. Hillsborough River State Park also offers 112 campsites, picnic areas, pavilions and the Spirit of the Woods Pool Side Café and Gift Shop. A swimming pool with a capacity of 216 swimmers is also within the park. From an afternoon picnic, an all day family reunion, an extended stay by overnight camping or a corporate gathering, Hillsborough River State Park provides an exceptional setting in a natural environment for folks to relax and reconnect with family, friends and colleagues. 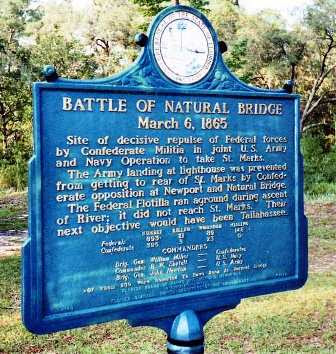 Another Florida spot steeped in history is Natural Bridge Battlefield State Historic Site in Leon County. Natural Bridge is the site of the second largest Civil War battle in Florida and where the St. Marks River drops into a sinkhole and flows underground for one-quarter of a mile before reemerging.

This site illustrates the crucial role the lay of the land can play in military strategy. In early March of 1865, Union General John Newton and naval Commander William Gibson mounted a two pronged advance toward Tallahassee. Newton landed his troops and headed north, but Gibson's gunboats ran aground in the St. Marks river. When word reached Tallahassee, the limited Confederate forces were quickly reinforced with volunteers. Some volunteers were recuperating veterans, while others were men as old as seventy and boys as young as fourteen.
at 6:06 AM No comments: 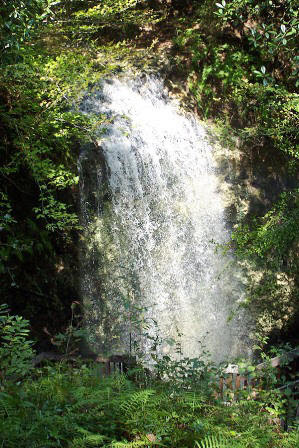 During the 1778 British occupation of Florida, Native Americans were still living on Falling Waters Hill and the surrounding area. Though they left no written records, artifacts are often found whenever a field is tilled.  In 1919, one of the first oil wells in Florida was drilled at Falling Waters. Indian legends and a wildcat stock promoter’s claim of oil, helped get the project going. A Tall, wooden derrick and steam driven rigs were used to drill for oil, but the drillers had little luck. When a depth of 3,900 feet was reached, a blow of gas released from the drill site temporarily excited area residents with a false report of a gusher. Promoters continued to drill the oil well to a final depth of 4,912 feet. When all was said and done, no oil of commercial quality was ever found. The well was capped in 1921.  The terrestrial caves of the park are documented roosting sites for the southeastern bat.
at 2:32 PM No comments:

A bathouse for every Floridian nature home 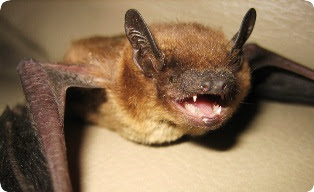 I got a bat house as a birthday present from my son and I am eager to to how well the bats like it. It says it can hold up to 300 which may be a bit much but I am looking forward to less mosquito in the yard with the help of these flying mammals. Florida’s 13 native bat species are gluttonous consumers of night-flying insects, including the ever-present, ever-biting mosquitoes. They can eat up to half of their body weight in insects in one night.

Although some mammals can glide, bats are the only mammal that can truly fly. Scientists have classified bats into a unique group or order called "Chiroptera", which means "hand wing." Bats literally fly with their hands! Their wings are much like our hands, but with longer fingers and a thin, but tough, membrane (skin) between the fingers. World-wide there are over 1,000 species of bats. From the fossil records we have learned that bats existed over 65 million years ago. Today, they inhabit all areas of the globe except Antarctica and the extreme desert regions, but most bat species live in the tropics.
at 1:51 PM No comments: