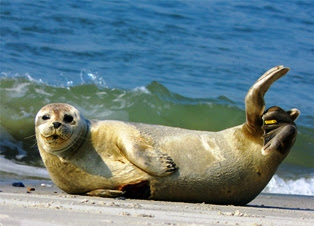 Seals live in the oceans of both hemispheres and are mostly confined to polar, sub-polar, and temperate climates, with the exception of the more tropical monk seals. True seals inhabit all oceans, except the Indian Ocean. Some species live in inland lakes in Siberia, Russia, and Finland. Seals forage, search for food, at sea, but haul out (get out of the water) to land to breed, molt, or shed fur, and rest. Seals eat mostly fish, but also feed on krill, squid, octopuses, and other seals. True seals congregate on land or ice to breed and molt. The males and females of some species migrate, travel, separately from breeding to foraging areas, some traveling as far south as Florida. Others species do not migrate. 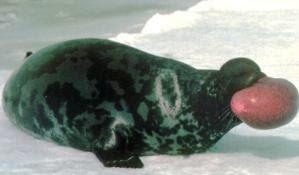 Adult hooded seals have black heads and silver-gray coats with dark blotches of varying sizes and shapes across their bodies. Pups are called "blue-backs" for their coat of blue-gray on their backs and whitish bellies; this coat is shed after 14 months of age when they molt. Adult males measure around 8 feet  long and weigh about 660 pounds. Adult females are noticeably smaller, measuring around 7 feet  in length and weighing about 440 pounds. The hooded seal is unique for the elastic bi-lobed nasal cavity, or "hood", that adult males can inflate and extend from the front of their face to the top of their head. Sexually mature males also have an elastic nasal septum, which, when inflated, resembles a pinkish red balloon, to attract females' attention during mating season and to display hostility towards other males. Hooded seals usually dive for food to depths of about 325-1,950 feet  for 15 minutes at a time. Adult hooded seals feed on squid, starfish, mussels, and fish such as Greenland halibut, redfish, cod, capelin, and herring. Hooded seals live on drifting pack ice and in deep waters. Some drift far away from their northern habitat towards much warmer regions every year, but they survive best in colder climates, as heat and constant sun exposure is harmful to them.  Hooded seals are migratory and can wander long distances; they have occasionally been found as far south as Florida, California, and the Caribbean.
at 12:10 PM