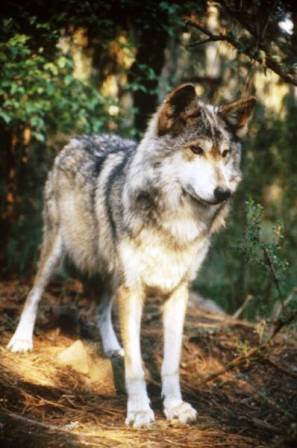 One of the most common questions we get at Floridian Nature is whether or not there or any wolves, particularly red wolves in Florida. The red wolf is one of the most endangered animals in the world. It is a shy species that once roamed throughout the Southeast as a top predator. Aggressive predator control programs and clearing of forested habitat combined to cause impacts that brought the red wolf to the brink of extinction. By 1970, the entire population of red wolves was believed to be less than 100 animals confined to a small area of coastal Texas and Louisiana. 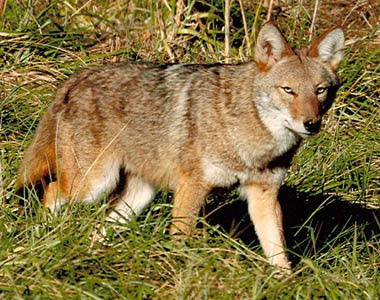 Many people don't realize how many coyotes now call Florida home and may not think of them when trying to identify an animal that may have seen. As you can see by these photos unless than animal is standing still, the two canines can be difficult to tell apart.  The red wolf is generally intermediate in size between the Coyote and the Gray Wolf. Like the Gray Wolf, it has almond-shaped eyes, a broad muzzle and a wide nosepad, though like the coyote, its ears are proportionately larger. The red wolf has a deeper profile, and broader head than the coyote, and has a less prominent ruff than the Gray Wolf.

Our little dachshund had a run in with a coyote and actually lived to tell about it. If I hadn't been right there when it happened I probably would not have believed it was a coyote since he was able to walk (or rather run) from the attack! After a few hours at the vet and about $500 Snickers was feeling much better!
at 2:38 PM