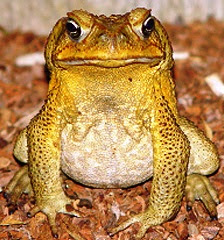 When a heavy evening rain is impending during the spring or summer, many frogs and toads begin to call. This is the first signal of intense breeding activity. Frogs and toads generally mate at night, since the darkness conceals them from sharp-eyed predators, especially wading birds. As rain starts to fall more and more frog voices are heard, until in certain places it becomes almost deafening.  Although it may seem like frogs are just singing for fun, it is actually the males who are calling to set up territories and to attract females. Most frogs in Florida breed and lay their eggs in shallow, temporarily flooded ponds, ditches, and depressions. Temporary water holes do not have large resident populations of predators, such as fish, salamanders, and water snakes, that would feed on the eggs or tadpoles because theses shallow pools usually dry up quickly. 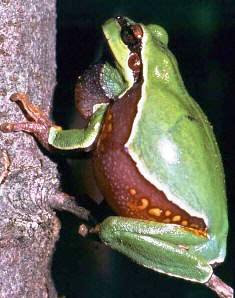 The Pine barrens tree frog is only about 1–3 inches  long and is one of the smaller species of tree frogs. Members of the species are predominantly green, with wide dark stripes. They often have spotted orange-gold markings on the hidden surfaces of their legs, and also tend to have large toe pads. Pine Barrens tree frogs are most commonly found in brushy areas, often near peat bogs or shallow ponds. They usually inhabit areas carpeted with thick moss. Adults are terrestrial, but tend to reside near water sources. Unlike most frogs, Pine barrens tree frog are tolerant of low pH levels, and often lay eggs in shallow, acidic ponds. Members of the species are currently distributed in three distinct populations: New Jersey Pine Barrens, the Sandhills of North and South Carolina, and the Florida Panhandle area. 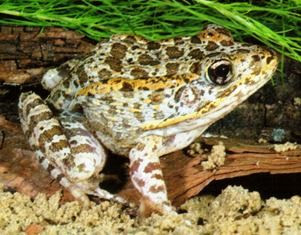 Gopher Frog (Rana capito)- These nocturnal frogs are noted for their short, stubby appearance. Their backs are marked heavily with dark spots, sometimes causing a clouded pattern. Their dorsolateral ridges are very distinctive. This frog will reach a length of 4.33 in.  The gopher frog usually spends daylight hours in burrows, holes, or tunnels that are created by other animals. The Gopher frog primarily inhabits the threatened sandhill communities, flat woods, and scrub in the Atlantic coastal plain, where it is usually found near ponds. The gopher frog breeds on spring nights in very wet conditions. They seem to be rare, but their secretive nature makes it difficult to determine their true population status.

Bog Frogs have rough dark green to brown backs, black mottled undersides, yellow throats, and may have light spots on the lower jaw. A light brown line runs along the lateral fold and does not reach the groin area. This frog is less than 2 inches long. This frog is uncommon in Florida and is found only in a few acidic streams in Walton, Santa Rosa, and Okaloosa counties in the panhandle. The Florida bog frog will call from spring to summer with a call which sounds like a chuckle -- a series of low-pitched single clucking calls, noticeably slower at the end of the call.

Learn more at www.Floridiannature.com
at 6:19 AM