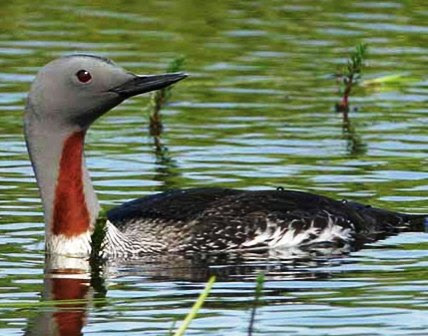 The red-throated loon is the smallest, slightest of the divers. It is distinctive among loons not only in size, but also in behavior, vocalizations, locomotion, and other aspects of life history. The Red-throated Loon, unlike other loons, does not need to patter on the water's surface on a long takeoff, but rather can take flight directly from land if necessary. Most loons must paddle furiously across the surface of the water before becoming airborne, but the small Red-throated can practically spring directly into the air from land, a useful ability on its tundra breeding grounds. Whereas only males of other loon species vocalize, both male and female 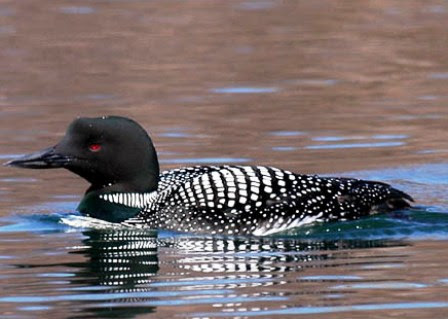 Common loons are heavy-bodied birds that sit low in the water just offshore. They are known as the great northern diver by British birders and for good reason. They dip their heads below the surface to visually locate prey and then power through the water with large webbed feet. Streamlined and efficient underwater swimmers, loons can quickly move in on small fish, crabs and invertebrates, usually swallowing them while still submerged. Most dives are shallow and last less than a minute, but deep dives may last up to five minutes. Loons are adapted to life on the water; their legs are located so far back on their bodies that they are one of the few birds that cannot walk on land. Instead they must crawl or push their bodies onto land or into their nests.

For more information on loons and other Florida birds be sure to visit our website   http://www.floridiannature.com
at 6:46 AM