One of my favorite Florida birds is the Great Blue heron. It can be found along the ocean shore or the edge of a small inland pond. An all white form is found from southern Florida into the Caribbean, and used to be considered a separate species, the "Great White Heron." The white form of the Great Blue Heron, known as the "great white heron," is found nearly exclusively in shallow marine waters along the coast of very southern Florida, the Yucatan Peninsula, and in the Caribbean. Where the dark and white forms overlap in Florida, intermediate birds known as "Wurdemann's herons" can be found. They have the bodies of a Great Blue Heron, but the white head and neck of the great white heron. Although the Great Blue Heron eats primarily fish, it is adaptable and willing to eat other animals as well. Several studies have found that voles (mice) were a very important part of the diet, making up nearly half of what was fed to nestlings in Idaho. Occasionally a heron will choke to death trying to eat a fish that is too large to swallow.

My husband just finished a new painting and it has a heron in it. Withlacoochee Heron was painted in  the style of the impressionists with loose lines that allow the eye to fill in the blurred areas. This painting was not done in plein aire like the impressionists but we did visit the spot and take multiple photographs.  The Withlacoochee River originates in central Florida's Green Swamp, east of Polk City. It flows west, then north, and then turns northwest and finally west again before it empties into the Gulf of Mexico near Yankeetown. The river is 86 miles  long and has a drainage basin of 1,170 square miles. "Withlacoochee" probably stems from a Muskhogean dialect. It is compounded of Creek we (water)thlako (big), and chee (little), or little big water. This word combination signifies little river in the Creek language, and as we-lako or wethlako may also refer to a lake, it may signify a river of lakes, or lake river. This area is near Dunnellon and was viewed while he was walking  on the Rails to Trails. 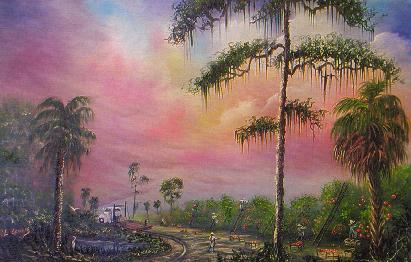 The State of Florida has many natural resources, and at Floridian Nature we believe that Florida artists are one of our great assets.  The definition of an artist is wide-ranging and covers a broad spectrum of activities to do with creating art, practicing the arts and/or demonstrating an art. In honoring artists during Black History Month, we chose the Florida Highwaymen.


In the early 1950’s through the 1980’s a group of twenty-six African-American artists painted beautiful landscapes that displayed the serene, undeveloped Florida landscape of their time.  They were from Fort Pierce, Florida and later became known as the "Highwaymen".  The 26 painters  latched onto art as a way to escape a more grueling fate: picking or crating oranges in the local groves.

Their artwork was primal and raw depicting idyllic views of the Florida landscape, before rampant development would reconfigure the state's topography forever.

The birth of the Highwaymen can be traced to 1954 in Fort Pierce, Florida, when a young African-American painter named Harold Newton met an established white painter named Albert "Beanie" Backus. Backus encouraged Newton to paint landscapes, and the young man eagerly obliged. Another African-American painter, Alfred Hair, began studying under Backus and for the next few years, Hair, Newton and a widening circle of associates produced Florida landscapes. The Highwaymen artists knew they could make a living painting, but they knew they had to be different. Mr. Backus was a prominent white artist and could sell his paintings for hundreds of dollars in galleries and shows; no gallery would show the work of unknown, self-taught African-Americans. 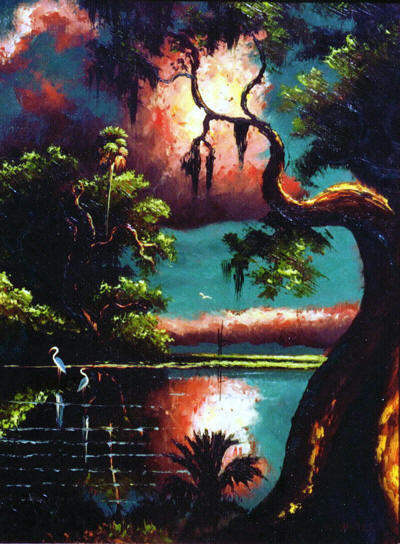 In order to help the whooping cranes endure, ultra light  aircraft has been used to bring them south for breeding.  Prior to 2009, all ultra-light led cranes wintered at the Chassahowitzka NWR, located near Crystal River, Florida. After a disastrous storm killed most of the young whooping cranes in 2007, the decision was made to split the flock into two groups. Now, so long as enough eggs are available, some juveniles are led to St. Marks and others to Chass. A total of 27 chicks over the past few years have spent their first winter growing into young adults on the St. Marks NWR.

So of the migrating birds don't make their destination and for a bird named Levi, it was the lure of romance that always caused him to fall short of his destination.For six years, Levi, an adult whooping crane, would make the long migration from Wisconsin to Citrus County’s coastline only to come up a handful of miles short of his summertime haunts in the marshland of the Chassahowitzka National Wildlife Refuge.Each year when he flew by a female song from a whooping crane in Homosassa Springs Wildlife Park would cause him to fly off course. “She would call out to him when the wild cranes would fly over and he would dive right in here,” Art Yerian said the park manager. Finally the decision was made to allow Levi to stay at the park and the result could be so new whooping cranes.
at 12:17 PM No comments: Links to this post

There have been more and more black bear sightings in Florida. According to the FWC You are more likely to see a panther or a black bear today in Florida than someone here 40 years ago! There was a total of 2,257 Florida black bear sighting reports as of June 2014, with more than 500 of those reports containing uploaded photographs. Sightings of bears were reported in 59 of the state’s 67 counties. To report a bear sighting contact the FWC.


The Florida Fish and Wildlife Conservation Commission may be poised to again allow bear hunts in the state. However, Citrus County will be among some of the counties exempt because of low populations of black bears. According to the Citrus County Chronicle, the controversial black bear management plan will be presented by officials at the commission’s meeting Feb. 4 to 5 in Jacksonville.

According to FWC officials, the decision about the plan is mainly due to an increase in bear-human interactions which has included attacks on people, bears being struck by vehicles and an exponential increase in calls to the FWC hot line about bears.

The average black bear male weighs about 350 pounds while a female average weight is 150 pounds. The bears' diet is about 80% vegetation. Foods include berries, acorns, insects and palmetto hearts. The average home range of an adult female black bear is almost 11 square miles' a male's is around 66 square miles. A healthy bear population needs at least 400,000 acres to survive. To protect an area of that size in a highly-developed Florida requires preserving the connections between core habitats. Bears inhabit both wetlands and upland forest habitats.