No blizzards in Florida

While the rest of the country is preparing for record snow and blizzard conditions we are in the 60s and the sun is shining bright. Winter is the perfect opportunity to visit some of Florida's great nature attractions.

Three Sister Springs in Crystal River is the main spot where manatees spend their winters.  Located in Crystal River, Three Sister Springs has a lot to offer when it comes to Floridian nature. Crystal River has a wide variety of species in the area’s rivers, estuaries and grassy flats. Massive redfish, trout, tarpon, cobia, grouper and other species are all plentiful. With its enormous oak trees and  waterways, Citrus County resembles what most of Florida must have been like 100 years ago. The abundant wildlife  in Citrus County Florida can be found in the pristine waterways and along the shores. In Crystal River and the surrounding area, flocks of cranes and herons fly overhead, while schools of fresh and saltwater fish swim along side the Florida manatees and occasional alligator sunning on the banks. The coastal inlets and wetlands that surround Kings Bay and the Crystal River remain much like they would have appeared hundreds perhaps thousands of years ago. Citrus County is a sportsman’s paradise offering both fresh and saltwater fishing. In these clear waters, anglers are able to site-fish for small bass, sunfish, bluegill and stumpknockers. Many coastal species such as redfish, mangrove snapper and mullet are also common in the mouth and adjacent waters such as Kings bay. 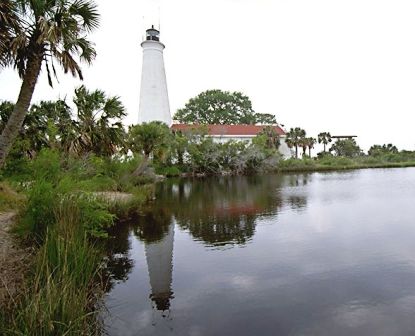 Another great spot to check out during the winter is St. Marks in Wakulla County. Established in 1931 for wintering migratory birds, St. Marks National Wildlife Reserve has a long tradition of excellent bird watching. There are over 300 species of birds recorded on the refuge, with 98 species nesting on-site. There are 19 species of ducks and many hawks, falcons, and shorebirds migrating through the refuge in the fall and winter. There are 14 active bald eagle nests and the endangered least tern and red-cockaded woodpecker also nest on the refuge.
at 2:25 PM No comments: Links to this post

One of the most common questions we get at Floridian Nature is whether or not there or any wolves, particularly red wolves in Florida. The red wolf is one of the most endangered animals in the world. It is a shy species that once roamed throughout the Southeast as a top predator. Aggressive predator control programs and clearing of forested habitat combined to cause impacts that brought the red wolf to the brink of extinction. By 1970, the entire population of red wolves was believed to be less than 100 animals confined to a small area of coastal Texas and Louisiana.

Many people don't realize how many coyotes now call Florida home and may not think of them when trying to identify an animal that may have seen. As you can see by these photos unless than animal is standing still, the two canines can be difficult to tell apart.  The red wolf is generally intermediate in size between the Coyote and the Gray Wolf. Like the Gray Wolf, it has almond-shaped eyes, a broad muzzle and a wide nosepad, though like the coyote, its ears are proportionately larger. The red wolf has a deeper profile, and broader head than the coyote, and has a less prominent ruff than the Gray Wolf.

Our little dachshund had a run in with a coyote and actually lived to tell about it. If I hadn't been right there when it happened I probably would not have believed it was a coyote since he was able to walk (or rather run) from the attack! After a few hours at the vet and about $500 Snickers was feeling much better!
at 2:38 PM No comments: Links to this post