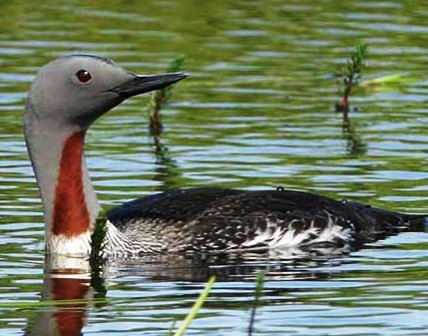 Florida is home to two native loons; the common loon and the red throated loon. The red-throated loon is the smallest, slightest of the divers. It is distinctive among loons not only in size, but also in behavior, vocalizations, locomotion, and other aspects of life history. The Red-throated Loon, unlike other loons, does not need to patter on the water's surface on a long takeoff, but rather can take flight directly from land if necessary. Most loons must paddle furiously across the surface of the water before becoming airborne, but the small Red-throated can practically spring directly into the air from land, a useful ability on its tundra breeding grounds. Whereas only males of other loon species vocalize, both male and female Red-throated Loons make calls, often together. The Red-throated Loon is the only loon that regularly forages far from its breeding territory, returning from distant lakes or the sea with fish for the young. Unlike other loons, the Red-throated Loon does not carry its young on its back. 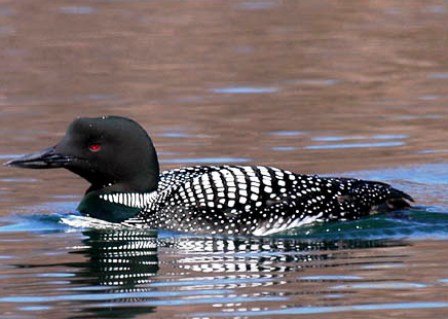 The common loon, with its exquisite breeding plumage and yodel-like call, has come to symbolize wilderness and northern lakes to many people. But once the breeding season ends in Alaska, Canada and the northern U.S., loons head south to winter along the Atlantic and Gulf coasts. Thousands of loons dot the bays and open oceans surrounding Florida and are a very visible part of the winter coastal landscape. While in Florida, both male and female winter loons have a white underside and a gray-brown head, neck and back. In late spring along the Gulf Coast and in north Florida lakes, a few birds acquire breeding plumage just prior to their migration north.
at 12:47 PM