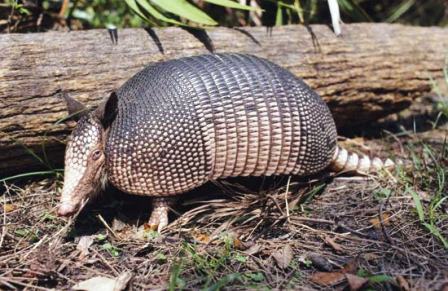 Armadillos are small placental mammals, known for having a leathery armor shell. The word armadillo is Spanish for "little armored one". In the United States, the sole resident armadillo is the Nine-banded Armadillo, which is most common in the central southernmost states. Armadillos have been consistently expanding their range over the last century due to a lack of natural predators.

Armadillos feed primarily on insects and their larvae. They also eat earthworms, scorpions, spiders, snails, and small vertebrates and their eggs. Reports of armadillo damage to birds' nests on the ground are rare. People cannot help but appreciate the fact that armadillos consume large amounts of armyworms, cockroaches, ants, wasps, flies, beetles, and grasshoppers. They have been known to dig up entire yellow-jacket nests. Armadillos usually search for food by rooting or digging in ground litter, but will occasionally eat berries and mushrooms. 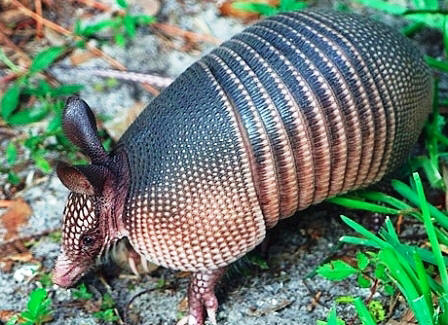 Armadillos were not always present in Florida.  During the past century, they expanded their range from Texas into the Florida panhandle. Armadillos are now found in uplands throughout Florida, except in the Keys and parts of the Everglades and Big Cypress swamp.

Armadillos are fascinating mammals. When they need to cross narrow water bodies, they often walk on the bottom under water. If it is a wide body of water, they will inflate their stomach to twice its normal size, allowing for enough buoyancy to swim across. When startled, armadillos often leap high into the air, and then run quickly to a nearby burrow. Armadillos dig burrows for homes or to escape predators, and a single armadillo can have several different burrows with multiple entrances. For more information about Florida nature be sure to visit our website www.floridiannature.com
at 8:43 AM