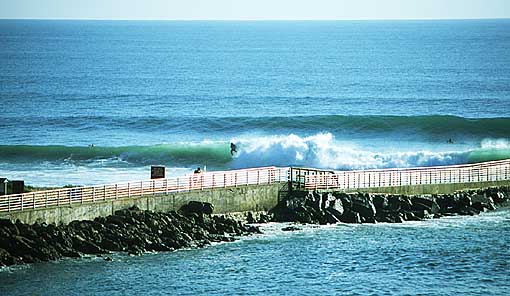 The history of the Sebastian Inlet area goes back to the end of the last ice age. The barrier islands formed from sandbars off the coast of the mainland. As vegetation took hold on the sandbars, animals moved in, followed by the first human inhabitants, the Paleo hunters. The Ais Indians were more recent inhabitants of the barrier islands. They were a tribe of hunters and gatherers who lived off the bounty of the land and sea. By 1760, all of the Ais Indians were gone. Like the other natives of Florida, they succumbed to European diseases and mistreatment. 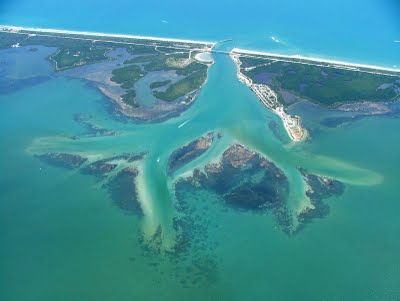 Sebastian Inlet State Park is a Florida State Park located 10 miles south of Melbourne Beach and 6 miles north of Vero Beach, Florida. The park lies on both sides of the Sebastian Inlet, which forms the boundary between Brevard and Indian River counties. The land for the park was acquired by the state of Florida in 1971. In 2006, it was the sixth most visited state park in Florida. The park occupies 755 acres on the barrier island on the Atlantic coast of Brevard County, at a point where a channel links the Indian River Intracoastal waterway with the Atlantic. Part of the Park is south of the Inlet on Orchid Island in Indian River County.
at 1:15 PM No comments: Links to this post 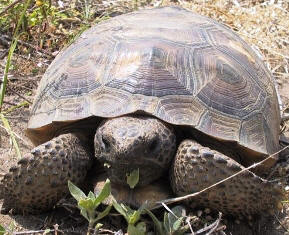 Florida has six endangered reptile species, eleven threatened species and seven species of special concern for a total of  twenty  four reptiles at risk in Floridian nature.  Reptiles have been around for 300 million years, and during the age of the dinosaurs, they ruled the Earth. Some 6,500 species of reptiles still thrive today. There are more than 8,000 species of reptiles on the planet, and the live on every continent except Antarctica ."Cold-blooded" is not the best way to describe reptiles- they get their body heat from external sources. Reptiles cannot regulate their body temperature internally as humans do. Reptiles are among the longest-lived species on the planet. For example, large tortoises such as the Aldabra tortoise can live for more than 150 years. Alligators can live nearly 70 years. Ball pythons, a popular type of pet snake, can live up to 40 years 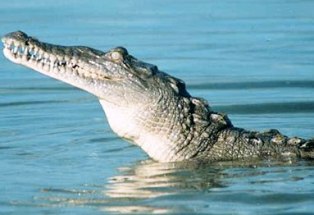 American crocodiles  are endangered in Florida. They live in coastal areas throughout the Caribbean, and occur at the northern end of their range in south Florida. They live in brackish or saltwater areas, and can be found in ponds, coves, and creeks in mangrove swamps.  Unlike the American Alligator, the American Crocodile has a narrow snout, and both upper and lower teeth are exposed on the crocodile when his mouth is closed. American crocodiles are more of a grayish green in color, while alligators are a darker black. Crocodiles can be seen sunning with their mouths open, or “gaping.” This behavior is related to regulating their body temperature, and does not mean that the crocodile is acting aggressively toward people. The American crocodile is so rare and shy of man that conflict with people rarely occurs. 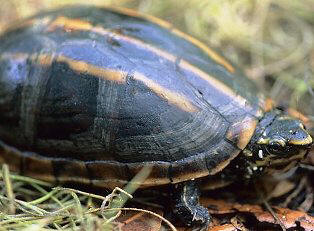 Another endangered reptile in Florida is the striped mud turtle.  Throughout much of its range in Florida, the striped mud turtle is characterized by yellow head stripes and three light longitudinal stripes on a dark brown carapace. This turtle is only 3 to 4 inches in length and has a double-hinged plastron, similar to the eastern box turtle. The sexes can be distinguished by the longer, thicker tails of males. The striped mud turtle is different from most other turtles species in the Southeast in that females nest in the fall, rather than the spring or summer. Striped mud turtles inhabit calm freshwater habitats, such as swamps and canals with soft substrates and are most common in cypress swamps and blackwater creeks.
at 1:24 PM No comments: Links to this post