Owls are a common bird in Floridian nature. They come in a variety of sizes and help keep area rodents in check.  Five species of owls call Florida home and include the screech owl, barn owl, barred owl, horned owl and burrowing owl. 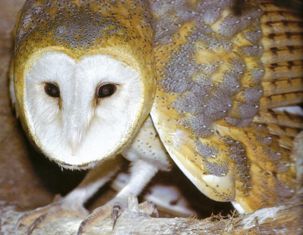 The barn owl (Tyto alba) is found throughout the state of Florida and inhabits hardwood and tropical hammocks, urban areas with abundant palms and large hardwoods, and manmade structures such as silos, barns, and deserted buildings.  Barn owls forage voraciously for rodents in open areas such as prairies, pastures, fields, and sparsely wooded areas. Barn owls in Florida breed from March through July and nest in secluded places like caves, barns, tree cavities, and large bird houses.  They build no actual nest and lay from 3-11 (most commonly 5-7) white or buff-white eggs. Many people attract barn owls by erecting nest boxes in an effort to control local rodent populations 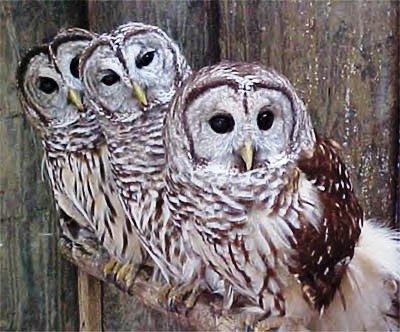 The Barred Owl is a medium-sized gray-brown Owl streaked with white horizontal barring on the chest and vertical barring on the belly. They are round-headed with a whitish/brown facial disk with dark brown trim. The eyes are brown, and the beak is yellow and almost covered by feathers. They have a long tail. There is no difference in plumage between males and the larger females. A very opportunistic hunter, a Barred Owl can sometimes be seen hunting before dark. This typically occurs during the nesting season or on dark and cloudy days. A Barred Owl will use a perch, from where it dives upon its prey - meadow voles are its main prey, followed by shrews and deer mice. Other mammals include rats, squirrels, young rabbits, bats, moles, opossums, mink, and weasels. Birds are taken occasionally, including woodpeckers, grouse, quail, jays, blackbirds, and pigeons. They also eats small fish, turtles, frogs, snakes, lizards, crayfish, scorpions, beetles, crickets, and grasshoppers. Birds are taken as they settle into nocturnal roosts, because they cannot catch birds on the wing. They will also swoop down to the water's edge to catch frogs, other amphibians, and occasionally fish. Barred Owls are attracted to campfires and lights where they forage for large insects. Prey is usually devoured on the spot.

For more information on Florida owls be sure to visit FloridianNature.com
at 2:09 PM